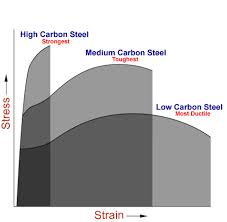 Since everything is made out of something, so we thought it a perfect time for a quick discussion about material characteristics.

“Inventing is the mixing of brains and materials.  The more brains you use, the less materials you need.” – Charles Kettering

Stiffness/elasticity concerns the lengthening or shortening of a material under loading.  Stiffness is resistance to change in length; elasticity is the ability to return to original size and shape.  Stiffness is measured formally by the modulus of elasticity, which is the slope of the straight line portion of the stress-strain curve: the steeper, the stiffer.

Strength is a measure of a material’s ability to accept a load.  The maximum strength of a material (usually tested in tension rather than compression) is represented by the highest point on the stress-strain curve.

Toughness is an overall measure of a material’s ability to absorb energy before fracture.  It is represented by the total area under the stress-strain curve.

Thanks to John Kuprenas and his great book, 101 Things I learned in Engineerin