The World Intellectual Property Organization (WIPO) released a new study on clusters of innovation across the globe based on patents granted.  “This is a pioneering attempt to identify the world’s innovation hotspots on a globally consistent basis through patent filings,” said Francis Gurry, Wipo director-general.

Asia dominates the list with the Tokyo cluster leading with 94,079 patents, Hong Kong/Shenzhen following with 41,218 and Silicon Valley rounding out the top three with 34,324 patents. 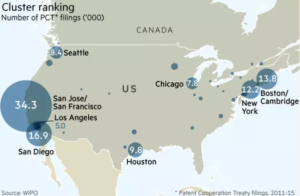 Unsurprisingly, the San Jose/San Francisco leads the US by a wide margin followed by large clusters in the Los Angeles, Boston, New York, Houston, Seattle and Chicago.  Outside of these large clusters, the volume of patents drops significantly.

Most of the patent work is from corporate sources but there are some standout universities on the list dominating their cluster like the Massachusetts Institute of Technology and the University of California.

By field, medical technology is the leading field for new patents followed by pharmaceutical and computer technology.

This new study presents in a new interesting way, where innovation is taking place in the US and across the globe.  I am looking forward to their new Global Innovation Index that is due to be released later this month.

The World Intellectual Property Organization (WIPO) is the global forum for intellectual property services, policy, information and cooperation.  For more information on their capabilities and resources please follow this link to their website.  More Info on WIPO